Keeping Calm in a Time of Rising Interest Rates

Monetary policy and fiscal policy are the two primary tools used to adjust a country’s economic challenges, such as inflation or low growth. Fiscal policy is the overall term for a government’s taxing and spending activities, and monetary policy primarily refers to the control of interest rates and total money supply in circulation. While fiscal policy does have important implications for the economy — monetary policy may tend to be what the market reacts most sensitively to. This may be due to interest rates and their associated borrowing costs tend to have a more direct short term impact on asset prices, as compared to government spending. The Federal Reserve controls interest rate policy that defines the rate at which banks can borrow. Historically, these policies significantly impacted the direction of the borrowing rates in other markets such as consumer credit and corporate bonds. However, bond traders’ fast-paced buying and selling of fixed-income securities in 2021, which led to an overall decline in the price of many bonds, might have you believe otherwise. At the start of 2021, the 10-year Treasury traded at 0.93%1 and reached 1.75% in May2 ultimately settling at 1.52% by year-end, resulting in a 61% increase3. Despite that dramatic movement in the 10-year-Treasury, the Fed interest rate policy didn’t change during 2021. In essence, market interest rates are a combination of what the Fed is doing as well as what market participants are pricing in based on what they believe policy will look like.

Despite that dramatic movement in the 10-year-Treasury, Fed didn’t increase the fed fund rate in 2021 but adjusted their policy. Yet, as we have recently seen inflationary pressures build up into the economy (recent PPI and CPI numbers indicate inflation is running at 7.04% year over year4,) we believe it is prudent to ponder the proper way to preserve capital in a rising rate environment. The bedrock of our firm is risk management, and our principal aim is to preserve capital during severe market declines while delivering a reasonable return during the up markets. Thus, as inflation has spiked higher, and the growing certainty of rising interest rates increases as the Fed has indicated, we need to prepare client portfolios for that outcome.

Typically, we believe bonds are intended to serve as the ballast of an investment portfolio and to counter the effects of severe equity declines. Bonds have done so since the mid-1980s when interest rates hovered in the mid-teens. However, we believe that investors may not be paying enough attention to their traditional “safe assets,” which may lead to blind spots in individual portfolios that could potentially cause significant harm. As illustrated in the chart below, using the 10-year Treasury as an example, you can see the impact on bond prices if rates started to rise. 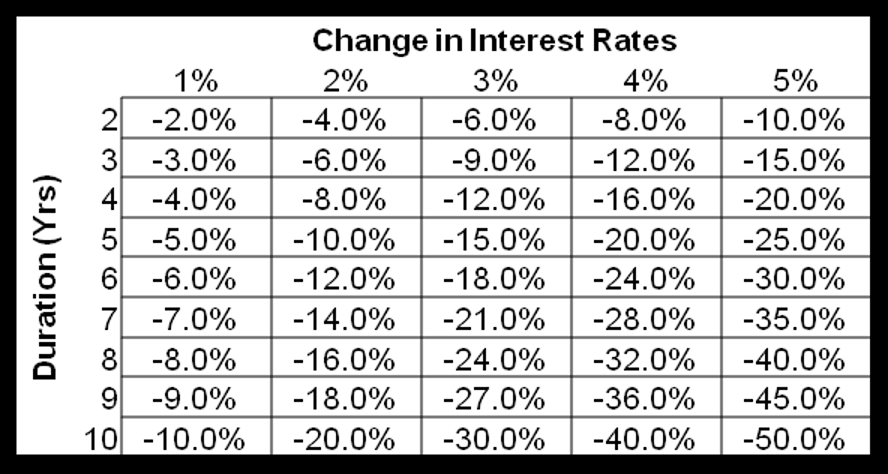 Since the great financial crisis, we have witnessed global central banks exponentially expand their balance sheets, with the U.S. Federal Reserve leading the way. Since 2007 the Fed increased their balance sheet from $870 billion to $4.1 trillion by early 2020, and currently stands as of the time of this writing at $8.8 trillion.5 We believe the natural result of such financial stimulus has traditionally been inflation, which at times can be rampant as it was in the 1980’s. That scenario triggered the Fed to tighten interest rates significantly, causing the US economy to fall into recession. Another potential consequence of higher interest rates is stagflation, a phenomenon characterized by higher inflation and slower growth, which is not beneficial for consumers or risk assets. In 2021, investors debated whether the inflation we experienced (and continue to cope with) was transitory as the Fed has maintained until recently, or more permanent.

In late December, the Fed reversed course on its stance regarding inflation and stated that it would complete the tapering of its monthly stimulus earlier than previously indicated and would raise interest rates 3-4 times in 2022. These actions were in response to the continuous flow of data of rising inflation as a result of ongoing supply chain issues, government subsidies since the onset of the pandemic in March of 2020, and the massive monetary stimulus from the Federal Reserve. In our opinion, it is hard to imagine the fed getting it just right as it is never an easy path and a constant juggling act. We are hopeful, though, that there can be a smooth transition and a soft landing. Inevitably, we believe that there are three likely outcomes: First, the Fed will raise interest rates too far and tip the US economy into a recession. Should that happen, they would likely reverse course and cut interest rates. Second, the Fed is so far behind the curve and inflation is much worse than expected, which would force the Fed to raise rates even further, faster, and for longer than expected. Third, potentially the inflation we are experiencing is, in fact, transitory and inflation comes back down. In that scenario, the fed will have to decide whether or not to leave interest rates alone.

Rising interest rates can also harm equities. When the Fed raises rates and boosts the cost of borrowing money, it also increases the cost of doing business for companies. If those higher interest rates persist for an extended period, elevated costs and reduced demand could lead to lower revenues and earnings, potentially slowing their growth rate and causing their stock prices to fall. We need to remember that stocks prices are merely a reflection of a company’s projected future cash flows discounted back to present value. As interest rates are a major component of this calculation, higher rates typically result in lower stock prices, especially higher growth companies that trade at higher valuation multiples.
As we contemplate all of these impacts and scenarios, we need to take into consideration the levels from where we are raising rates from. We still remain near historical lows and a normalization of rates, which will likely take the fed funds rate to 2%, is still an area that has traditionally been seen as accommodative. Thus, much of this debate comes down to a matter of perception.
There are, however, some sectors of the market that can benefit from higher interest rates. For example, in financial services, companies may benefit from better Net Interest Margins as well as increased lending and trading activity. Other areas we believe may be deemed defensive, such as utilities, consumer staples, and pharmaceuticals, tend to also do well.

A final thought reflects on the comparison between the yield on the stock market as compared to the bond market. The current trailing 12 month dividend yield on the S&P 500 is approximately 1.28%6, and over the past year, many investors have increased their allocations to equities to compensate for the lack of yield available in the bond market. However, if interest rates rise enough, it may start to divert investment from the equity markets back into the bond markets. So, how do you protect your portfolio when both stock and bond markets are declining?

At Blue Square, we are focused on risk management and reducing the amount of volatility in our clients’ portfolios. Using our proprietary technology and rules-based approach to investing, our decisions are not swayed by predictions or emotions.

Our investment strategy aims to position portfolios defensively during significant market declines. By systematically raising cash during these periods and then investing it when markets are more accommodating, we aim to create a less volatile investment experience, and ultimately deliver better risk-adjusted returns over full market cycles.

At Blue Square rather than trying to predict the future, we aim to prepare for it, regardless of the market’s direction. Should you have any questions or would like to discuss our strategy and capabilities in more detail, please do not hesitate to reach out and we would be glad to help.

Blue Square Wealth is a SEC-Registered Investment Adviser. A copy of the Firm’s Current Disclosure Brochures can be found on the SEC’s IAPD site or may be requested at any time by contacting us. Registration of an investment adviser does not imply any specific level of skill or training and does not constitute an endorsement of the firm by the Securities and Exchange Commission.

Significant risk may accompany investments in stocks, bonds or other asset classes over short periods of time. Investment return and principal value will fluctuate with changes in market conditions. Your investment may be worth more or less than your original cost. Past performance is not indicative of future results.

This blog is a publication of Blue Square Wealth. Information presented is believed to be factual and up-to-date, but we do not guarantee its accuracy and it should not be regarded as a complete analysis of subjects discussed. All expressions of opinion reflect judgment of author as of date of publication and are subject to change. Information contained herein does not involve rendering of investment advice. A professional adviser should be consulted before implementing any of strategies presented. Information is not an offer to buy or sell, or a solicitation of any offer to buy or sell securities mentioned herein. Different types of investments involve varying degrees of risk. Economic factors, market conditions, and investment strategies will affect performance of any portfolio and there are no assurances that it will match or outperform any particular benchmark. This document may contain forward-looking statements relating to objectives, opportunities, and future performance of U.S. markets generally. Forward-looking statements may be identified by the use of such words as; “believe,” “expect,” “should,” “potential” and other similar terms. Examples of forward-looking statements include, but are not limited to, estimates to financial condition, results of operations, and success or lack of success of any particular investment strategy. All are subject to various factors, including, but not limited to economic conditions, changing levels of competition in industries and markets, changes in interest rates, and other economic, governmental, regulatory and other factors affecting a portfolio’s operations that could cause results to differ materially from projected results. Such statements are forward-looking in nature and involve known and unknown risks, uncertainties and factors, actual results may differ materially from those reflected in forward-looking statements. Investors cautioned not to place undue reliance on forward-looking statements / examples. None of Blue Square Wealth or any affiliates, principals nor any other individual / entity assumes any obligation to update any forward-looking statements as a result of new information, subsequent events or any other circumstances.